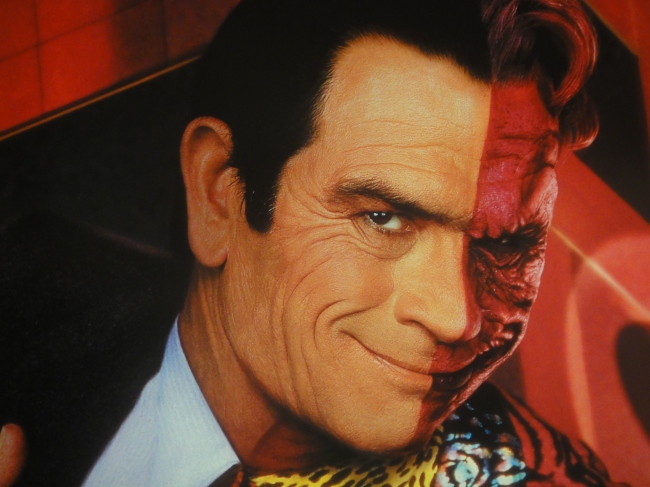 Just yesterday morning my wife and I were talking to a family about a problem with split behaviour.

My mind went to the Greek God Janus, after whom the month of January is named. Janus is the two-faced god of doorways and passages. Hence the word janitor which is commonly used today.

Speaking of two faces, remember Batman’s enemy in comic books? He is actually called Two-Face. One side was distorted and ugly, and the other side was normal. His hideous appearance wasn’t only outward but inward as well – almost like a split personality.

Sadly we still have church leaders and people who are two faced and hypocritical in their ways. We have a sin nature that creeps up subtly even though we call ourselves believers.

Does not the book of Proverbs tell us that a dishonest man spreads strife, and a whisperer separates close friends? Prov 16:28. How true! David also cries out a desperate prayer in the same manner…Do not take me away with the wicked And with workers of iniquity…Who speak peace to their neighbors, But evil is in their hearts.” Psalm 28:3

There is a whole category of people whose behaviour, by and large many times we excuse. However, God does not. He does not find them acceptable; they and the unseen attitudes of their hearts He finds extremely deplorable. They are the kind of people who will say one thing to your face, but say another thing behind your back. And even worse to God than what they say about you is what they really think about you in their hearts!

Jesus spoke clearly as ever against two-facedness. He out rightly called it hypocrisy. No wonder the strong language Jesus uses towards them…you snakes! You brood of vipers! Strong language is needed to make people sit upright and think about what they have been doing.

Let me take you to the seven woes Jesus pronounces upon those that walk in this dimension. This is serious, and must be heeded before we go over the waterfall of self-destruction.

The seven woes that Jesus pronounces are misery and calamity for those that do these things…what things?

Two-faced and fake people are people who are not being true to themselves. They continually deal with hypocrisy, lies, gossiping, and slander and are truly not friends anyone should have. For example people are friends with you in person, but as soon as they are away from you they slander you. Another example are people who are friends with you when others are not around…but when others get around them, they act like you are not their friends at all. A Christian who deals with hypocrisy, lying, gossip, and slander is not a Christian at all, we expect that in the world. Christians are not to be like the world.

This coming month we enter the Passover season. It is a time of self-examination and covenant.

It is in this time where we need deep introspection asking own hearts some somber questions. Am I a judgmental? Have I truly been consistent with my speech and actions? Am I open to willingly receive instructions and correction from others?

It is most likely that you will rub shoulders today with some people that are just like what I have been talking about. One piece of advice…is be careful of them. Discern their hypocritical hearts and don’t be tainted by their iniquitous ways. If you allow them into your inner circle, they will ensnare you. So be careful.

Also do not become like them! It is so easy to fall into a two-faced trap and then go on to a two-faced living. Ask the Lord to keep you protected from hypocrisy…giving you integrity of word and thought.

Let us keep in line with David’s prayer in Psalm 28:3…Do not take me away with the wicked and with workers of iniquity.

How true that someone wrote…Next to hypocrisy in religion, there is nothing worse than hypocrisy in friendship.